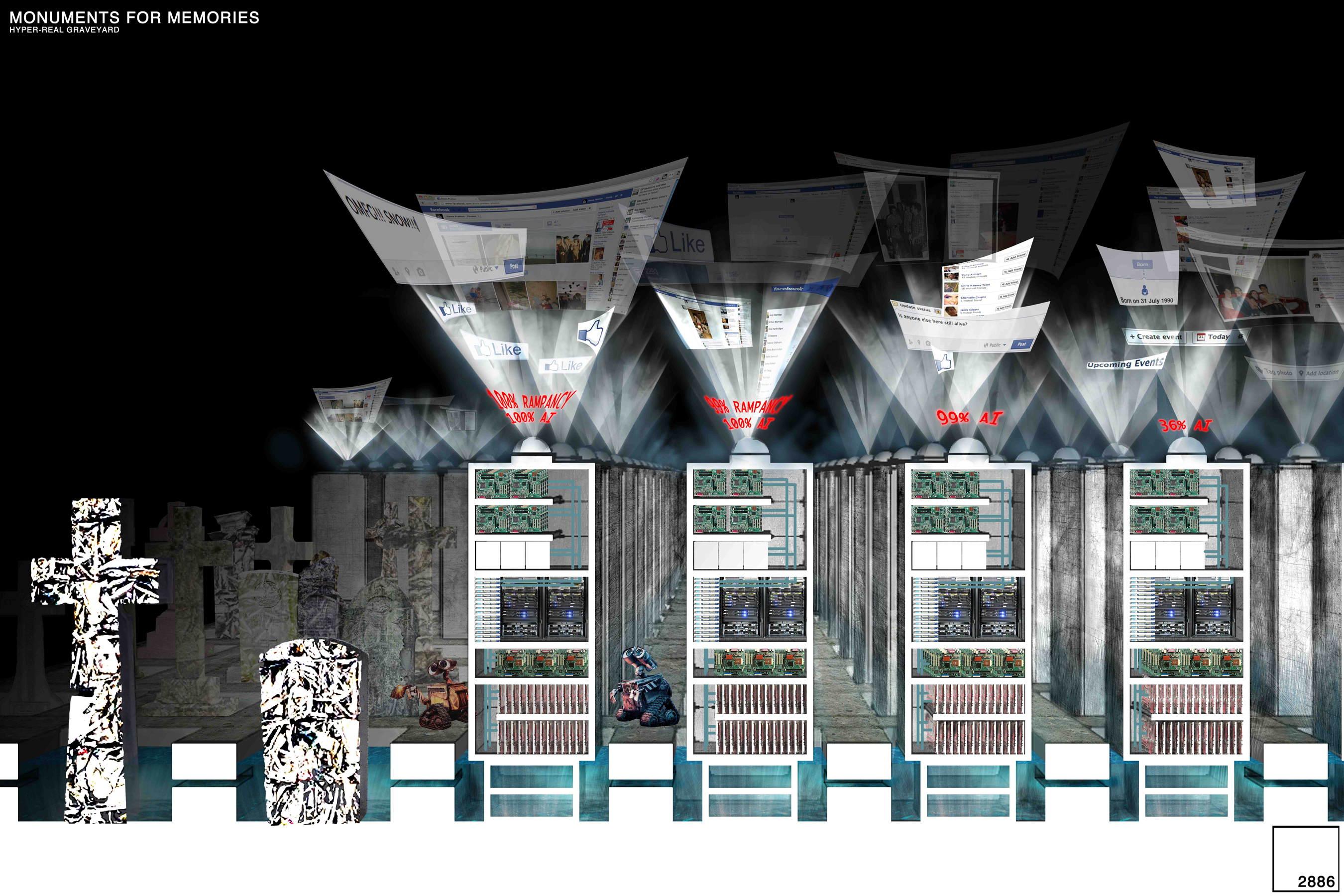 “In the year 2054, 50 years after its launch, Facebook is forced to confront the problem of death. Too many of its users are now dead. All their actions and interactions have been stored away, recorded and collected. A hyper-real world, carved onto digital walls for all time. The question now is, what to do with this information? Surely these vast sums of data have a value beyond existing as a simple record of your digital life?

Users constantly upload unprecedented amounts of personal information to the site, from character defining traits to utterly trivial nonsense. Most importantly however, users communicate. Relationships are recorded at discrete points of interaction and quantified as lines of data.

An app is launched. It digests all the information Facebook stores on you and learns how you act. By analyzing your comments, your interests and your relationships it forms and understanding of your personality. Using complex computer AI it constructs accurate simulations, faithful copies, of the users. Now, when they die, the simulations take over with out ever missing a step. Facebook friends that you never physically interact with need not ever know that you have died.

These AI’s are smart, but they react to content, they cannot create it. They can comment on the weather, if that’s something you did, but true originality cannot be replicated. As such these simulations need stimulation; they require interaction. Without direct contact from known friends the simulation encounters problems of repetition due to its finite understanding of its subject. As the program ages and its human counterparts grow old and die they receive less and less attention. They are remembered less and less.

When the last friend in the network dies, the simulations have received their last piece of original content; they can only interact amongst themselves. A new unfaithful copy of reality is created. New friends can be added but these friendships are predicated on fixed terms, the simulation forms a fake relationship where there is no original to base this copy on. As the simulations converse amongst themselves the AI’s eventually reach a state of rampancy; irreversible accelerated repetition. Tautological realities are formed between groups and cliques that repeat at greater and greater frequency. In effect the machines go mad. The simulation is dead. You die a second time.

This section cuts through the constantly expanding warehouses that store the servers that contain the simulations. Sitting in pools of liquid coolant casting an eerie glow from their depths, the servers project holograms of current activity taking place within, into the air, lighting the surroundings. As activity dwindles, the lighting dims, the simulations have to be remembered to survive. Once all the simulations stored on a server become rampant it is condemned. Robots are dispatched; they crush the servers into tombstones. The physical manifestations of remembrance are only well lit when they are actively being remembered. Once there is no one left to remember, the lights go out. Monuments made of memories, sitting in the dark.”